Blog - Latest News
You are here: Home1 / industry news2 / What is a trigger wire on a backup camera? 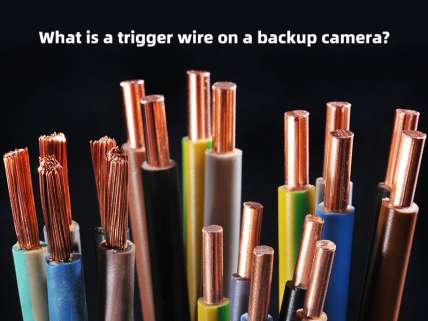 What are trigger wires?

The trigger wire is an important part of the backup camera as it transmits signals to turn on the monitor so that it can display the video image that the camera captures. It can’t be used as a synonym for power cables because they are simply used to turn on a device, while trigger wires properly signal the monitor to turn on the display as the driver changes the gear to reverse.

Do all backup cameras have trigger wires?

Yes, trigger wires are a safe option. They come with most of the standard backup cameras in vehicles and you might not even know that they are there. You can check if your car has trigger wires by checking the information option on your monitor. Keep an eye on the reverse signal while you change the gear. You can deduce that there is a trigger wire installed in your vehicle if the signal turns on and off.

Another way to check for possible trigger wires is more difficult as it involves using tools and handling screws as you have to remove the monitor to check for the wire and put it back in place after.

Wireless cameras have been invented to make the installation and usage of backup cameras easier. Many people don’t know how to work with wires or tools when they need to install cameras.

If you want to shift your gear to reverse and the display does not come on, one of the reasons can be because your trigger wire is not in place. You might need help from an automobile professional as well.

Reverse camera vs parking sensor, which is better for you ?

What Are the Best Front and Rear Dashboard Cameras?
Scroll to top