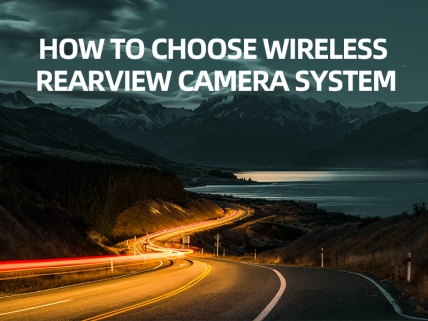 Wireless rearview camera systems work best when the distance between the transmitter and receiver is the shortest. That means that they usually work better on smaller vehicles than on large SUVs or trucks.

Water Resistance
The heart of any rearview camera system is the camera itself. The reverse camera you choose should have a waterproof rating at least IP67, IP68 or IP69K will be better.

Night Vision
The camera should still work very well even at dark night, this functions usually requires the camera with built in infrared lights.

Mounting
There are many types of cameras with a variety of mounting methods, but the easiest method for installation are the license plate bracket models. They prevent you from having to drill more holes to mount the camera.

Height Tiltable
Make sure that a camera mounted to the license plate bracket can be height adjusted via tilting or you may be stuck with a view to the rear that isn’t ideal.

Viewing Angle
Viewing angle is important when it comes to any car camera. Make sure the camera you choose has at 170 degree or better angle so that you can capture the whole area behind your vehicle.

Distance Detecting Line
Some cameras come with a built-in distance scale line display to help with backing up your vehicle and it is a really nice feature to have.

Video Monitor
Video monitor sizes for back up cameras have gotten larger over time. A 7 inch lcd video display definitely provides a better picture of what’s behind you than a 3.5 inch display, but it also occupy a lot of space on your dashboard. But think about where you can put the display before you made the final decision. Remember that you only use it when you back up and otherwise it’s just going to mounted to your dashboard or windshield, and take up a lot of space. For any WiFi backup camera system you buy, the monitor should activate automatically when it receives a video signal and the signal from the rear view camera should have the first priority over other possible inputs.

Can we use rear view camera or backup camera on driving test ?

How To Clean Truck Parking Sensors?
Scroll to top