Blog - Latest News
You are here: Home1 / industry news2 / Reversing radar or reversing camera ? which one is better ? 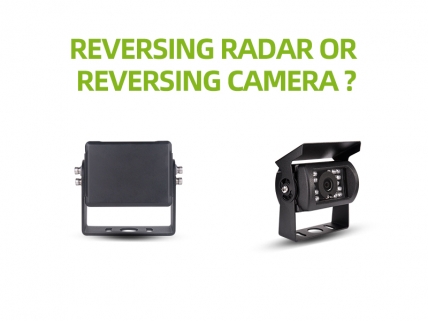 When you are consider buying a car, regardless of the model you want to purchase, thousands of US dollars or tens thousands of US dollars, there is still some car models are without parking sensor ( same as reversing radar ) and reversing camera.Fortunately, both products can be easily purchased online or at auto parts store. Today, we are going to discuss: Is it better to use reversing radar or is it better to use reversing camera ?

First of all, let’s talk about reversing radar, since it is being called radar, then its working principle is of course learned from bats. The radar probe emits ultrasonic waves. Once the ultrasonic waves hit obstacles, they will be reflected back. Then the system will calculate the distance between radar probes and obstacles. Then the driver is given different frequency alarms by the system according to the distance to help the driver better determine the parking position.

In actual operation, changes in light have no effect on the reversing radar. Even if it is raining heavily, it will not affect the reversing radar too much. Unless the probe is covered by a piece of mud, it will lead to false alarms. Of course, these premise is that you have bought a good parking sensor. Some reversing radars have virtual image display, and there are distance broadcasts, which can effectively help the driver reversing. However, some reversing radars only have alarms. For car owners who cannot see the blind spots, they cannot fully believe the reversing radars, because low position stones ( lower than the , iron pillars, or snow pile maybe ignored by the sound waves and the radars will keep silence.

In other words, objects that are shorter than reversing radars have the opportunity to escape from its detection. If you continue to reverse the car at this time, you may encounter obstacles. And some reversing radar with poor respond ability, it will take a certain reaction time before the alarm, so the speed must be slow when reversing

The reversing camera is equivalent to a real-time video monitor used when reversing. It is more vivid than the reversing radar. No matter whether it is a low rock or a thin iron pillar, they can’t escape from its eyes. For living creatures that move, it allows drivers to better understand the situation behind them. With reversing camera system, kids playing behind the car can easily being found and drivers can easily avoild of unnecessary accidents.

In actual operation, reversing camera performance has a great relationship with the reduction degree of the camera. For example, a reversing camera with a wide angle may cause the scenery on both sides of the screen to be distorted, thus affecting the correct judgment of the driver. Of course, there are some good reversing camera system, they have been designed with predict function, such as when you turn the steering wheel, the virtual line in the screen will changes according, so that the driver can better determine whether to continue reversing, or forwarding to re-adjust the car body position. However, the reverse camera also has its drawbacks. When the camera lens is covered with water or other dirt, or when bad weather (such as heavy rain) is encountered, it cannot work properly.

Saying for a long time, it is difficult to pick which one is better from the two. After all, their market prices are not much different, and the installation steps are almost the same. They also have their own advantages and disadvantages. So the final suggestion is if you feel that you can reversing easily, it doesn’t matter if you choose one or the other. However, if you still have problems reversing to some spaces , then we would suggest you to to install the both types. Actually, reversing radar and reversing camera are like the ears and eyes when reversing. Better not to rely on one alone, better using them together to complement one another.

How To Clean Truck Parking Sensors?