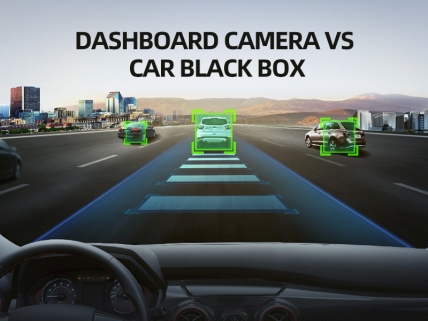 In a brief way, dashboard camera and car black box have below 4 significant differences:
1. Dashboard camera consist of a camera, a monitor ( optional ), data cards and data access socket and so on. While the car black box is more close to the name of “black box” , usually comes in a small Quartet black box shape.

3. Video captured by dashboard camera is more accurate and comprehensive because it also records the time,location of vehicle, and the driver’s vision. The recorded video is automatically stored in the sd card,you can access these videos easily.The car black box records the speed, acceleration, deceleration, and braking of the vehicle within 5 seconds before the collision.It is not easy to get these data from car black box. In most case,only car manufacturers can access these data.

4. Dashboard camera,as long as it connected to the car circuit, they will automatic start.it is very necessary for dashboard camera to start up automaticlly, as you may miss recording videos because of such a repeated action.The car black box is totally different, the researchers’ developing purpose of car black box is to track the reasons for the activation of airbags. Therefore, it is only activated a few seconds before the collision event, and this activation method has continued till today.

Above are the significant differences between dashboard camera and car black box,we hope these information can help.