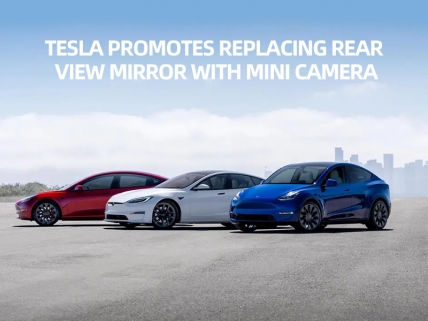 Tesla Model S is considered to be leading a revolution in the electric car market, from the Tesla new generation Model X SUV models, the company founder Elon Musk once again set off a change trend : replacing the traditional rear view car mirror with mini camera.

When Tesla Model X SUV debuted, its many features let people shine, such as “wing” style door, no traditional rear view mirror.Actually, Model X replaced the rear view mirror with a mini camera, and the images captured by the camera will displaying on the electronic touch screen lcd inside the cabin. Although this reduces the Model X wind resistance, but it also violated some of US security requirements.

The regulations of the US authorities on the use of car mounted cameras should originally in effect in 2013, during which Tesla had been lobbying legislators to revise the law, allowing mini cameras to replace traditional rear view car mirrors, so US lawmakers have been postponing the law implementation. In 2016, Tesla,GM, Toyota, Volkswagen and other 12 members from car manufacturers Union ,made a proposal to the NHTSA, and recommended to use the rear view camera to replace the traditional car rear view mirror.

Replacement of the rear view mirror can simplify the car body structure, while reducing the wind resistance at the same time.Currently, improving fuel efficiency and car energy efficiency, become more and more important for car manufacturers and car owners. It is estimated that if use mini camera instead of rear view mirrors, the vehicle wind resistance will be able to reduce up to 5%. In fact, Volkswagen XL1 and some other car models, has been considered no longer using rear view mirrors for energy efficiency, but Tesla is the only one company really want to promote the legislative reform for car cameras.