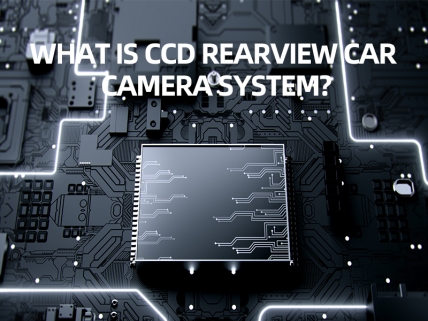 What is the CCD?  CCD ( Charge-coupled Device) is a semiconductor device, which can convert optical image into digital signals. The tiny photosensitive material on the CCD is called pixel, and more pixels on the CCD means higher resolution of picture. There are many arranged photodiode on the CCD, which can sense light and transform light signals into the electric signals, then CCD convert electric signals into digital picture signals though enlarging the external sample and analog data.

What is the CCD camera?  The CCD camera focuses the image of the object on the CCD chip through the lens, then CCD accumulates corresponding proportion of charges according to light intensity, these charges will covert into video signal under the control of video sequence, thus you can watch the video when the video signal is connected with monitor or TV.

The principle and composition of CCD rearview car camera system

The principle of CCD rearview car camera system : CCD rearview car camera system is an improvement from original reversing radar. The car camera mounted on the rear end of the car,  take the picture and send the video signal into car display near the driver’s position though transmission line, which can make the driver see the environmental obstacle on time around the rear end of the car and expanding the view of driver, also increase the safety efficiency and make sure driver have a safe reversing action.

Generally speaking, the CCD rearview car camera exist for drivers could having a good view behind of the car so that they can have a safe reversing and avoid to injury passerby .

Shenzhen Luview Co., Ltd is a professional manufacturer in China specializing in developing and manufacturing CCD rearview car camera, dashboard camera, lcd monitor and other car camera products. If you are interested in our products, please feel free to contact us by email: [email protected]

How to choose a quality driving recorder?
Scroll to top