Blog - Latest News
You are here: Home1 / industry news2 / Why car camera pixels only 0.3 million while cellphone camera up to millions ? 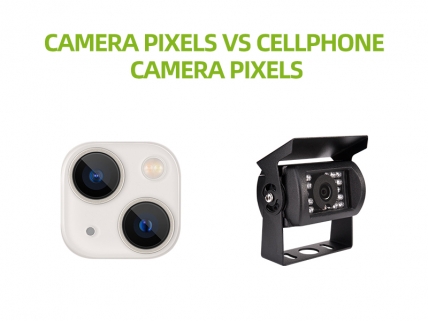 The main reason is that the traditional automotive industry with features of “slow”, any new technology and products to be used in the car must go through a long R & D and verification period, the phone can changing generations once a year,but the car needs at least five years. Of course, finally it depends on the market and the cost. This is a general answer to this question.

From technical point view, whether it is high and low temperature, vibration, EMC problem etc., can be fully designed in accordance with the car requirements. Mobile phone camera with the consumer price chip,it is fine to change car-level chip on car.

Since the technical is not a problem, then why the car camera pixels is still so low ?

A complete camera system should include a camera ( mainly regarded as video/image sensor ), the video transmission (including CVBS LVDS and Ethernet) and the display device (lcd display).

Firstly, camera sensor: currently meet the car-level requirements sensor and has been mass production is mainly 0.3 million pixels camera (which is used in everyone’s car), and 720P camera ( with around 1 million pixels ) two types. 720P image sensor is only mature in recent years. At present, the price of the two image sensors is about three times in difference. Technical requirements can be met,but the final cost will be relatively increased a lot.

Secondly, the transmission:
Standard definition: the current normal quality camera are used CVBS signal format transmission, CVBS is probably used twenty years ago at home on cable TV. Theoretical transmission resolution is only a few hundred thousand pixels. This transmission method is very mature, and has been used in the car for a long time, there is no problem. And the signal can be directly sent to the image sensor output, no additional encoding chip needed, but has a low requirements for the transmission cable. Its advantages are the cost and stability. The most important is that most lcd display reserved input interface is also CVBS.
High definition: including LVDS and Ethernet two types. First LVDS codec chip is not cheap, wire is also very expensive,and used in camera only in recent years. Ethernet car PHY is also very expensive, but no requirement for wire, although the Ethernet in the civilian sector has been mature, but in the car only a few famous car manufacturers such as BMW dare to use.

Technically really no problem, the problem is that the car manufacturer is not willing to spend such manpower and cost.For the new things and technology, in general,Europe and the United States may try first in luxury car,then in civilian car, and then use in Chinese market through the joint venture in China.Now a lot of luxury cars in Europe and America used a 720p high definition camera, and I guess it still need 5 years to be popular in Chinese and other developing countries civilian class car , so let’s just wait for it.People who can not wait to buy, can buy a 720p rear view car camera from after market, and use a display that can match this hd car camera.