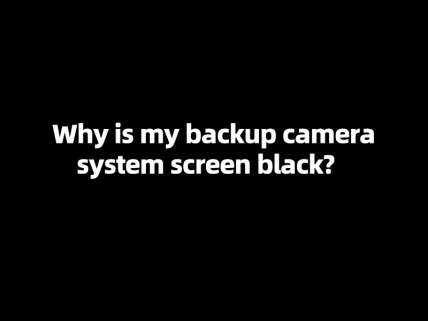 A backup camera, frequently called a reverse camera, is a significant part of a car nowadays. Drivers use them as allies to reverse while reversing their cars. If these cameras stop working, it can be a hassle for you while driving and trying to park.

What does black screen mean?

This is one of the most common issues that a backup camera faces. A black screen is displayed on the monitor when you put your car in reverse gear, it doesn’t even show any warnings for you. That’s why this error is so confusing because it comes as a surprise.

Reasons for a Black Screen

How to fix a black screen?

There are various ways that you can use to fix a black screen:

Some cars have cameras that you can reset. This backup camera comes with a button, you simply have to press the button to put it in reset mode. It only takes a few seconds before the camera starts working in perfect condition.

Costs of fixing it

You can try to fix the black screen and the camera yourself by trying out the various steps mentioned above. If the camera starts working with your efforts then you don’t have to spend much money. However, if you have to get another camera installed then it can be expensive because you will need to get help from a professional who knows his way around a car.

With backup cameras gaining importance for cars, they must be installed in all cars, and their problems like black screens and no signal issues are taken care of.

Why reverse camera interference and flicker when engine running ?
Scroll to top