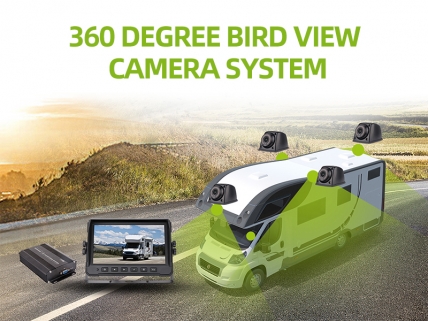 360 degree car camera system is generally installed on front , rear, left and right sides of the bus and truck, small car etc. An electronic control unit combine the four high-resolution digital camera imaging in a lcd display, the driver just press the button, then he can get full vision around the vehicle from  different angles, it feels like live show. Luview Co., LTD has developed a 360 degree car camera system so that drivers only look at the monitor can see blind spot area that the rearview mirror can not cover.

The corner of the protrusion, the corner of the building and other vehicles on the road can be easily seen, while the driver in a special environment can also be safe operation, such as traffic-intensive cities, narrow loading and unloading ramp ,  or area where the building is chaotic.  Luview’s innovative 360 degree car camera system can even help improve the safety of the car in a parked status because it can be set to a permanent start, which means that when the truck is stopped, the driver can only watch the monitor to monitor the goods on board.

Users can choose the 2D or 3D display mode to observe the car and the surrounding panorama, just press a button and you are able to switch between the two display modes. In the two-dimensional model, the driver’s view field is focused on the nearest distance from the car, and in the 3D mode the surrounding objects and other road users ( cars etc ) can be more easily identified. With better visibility, the driver can not only change the viewing angle, but also control each camera to more accurately and clearly observe a particular area in a complex driving environment. Luview’s new 360 degree car camera system improves the safety and efficiency of commercial vehicle operation – faster operation time, shorter loading and unloading time, reduced traffic accidents, reduced downtime and failure time, reduced cost of damage and repair, and parking of vehicles and the risk of lose goods is also greatly reduced.

The 360 degree camera based monitor system is used as a parking assist in a wide range of applications in high end automotive applications.  Luview’s current 360 degree camera system is particularly suitable for trucks, buses, agricultural vehicles and construction vehicles. Designer not only take into account the different characteristics of these vehicles, but also concerned about the system integration during the vehicle manufacturing process. They also consider the different spatial relationships in the cockpit of different vehicles, as well as the more complex operating environment of commercial vehicles.

What is AHD camera and its advantages ?
Scroll to top